For over a decade the Commission on the Conservation of Antarctic Marine Living Resources, CCAMLR, has been discussing the establishment of Marine Protected Areas, MPAs, in Antarctic waters.

The CCAMLR is formed by 24 countries and the EU and is tasked with the conservation of marine life in the Southern Ocean surrounding Antarctica, giving effect to the Convention on the Conservation of Antarctic Marine Living Resources, which entered into force in 1982.
In 2009 CCAMLR set itself the target of 2012 to achieve a representative system of MPAs within the Convention Area. Concurrently, CCAMLR adopted the South Orkney Islands Southern Shelf MPA (Conservation Measure 91-03, 2009), the first high seas MPA worldwide, and subsequently in 2011 a General Framework for the Establishment of CCAMLR MPAs (Conservation Measure 91-04, 2011).

After initial progress, discussions to create two large MPAs in the Ross Sea and in East Antarctica were in virtual gridlock since 2012, primarily as a result of opposition by Russia, Ukraine and China. This changed dramatically in October 2016 when CCAMLR achieved consensus on the adoption of the Ross Sea region marine protected area (Conservation Measure 91-05), which has an area of over 1.5 million square kilometres and is the largest MPA in the world to date.

While there were some expectations that there might be some progress in the Ross Sea proposal in 2017, this was by no means granted. The last remaining issue was the extent of duration, with some Members wanting "permanence" and others "very short duration" of 20 years or less. The ultimate result was that the overall designation for the MPA was 35 years. 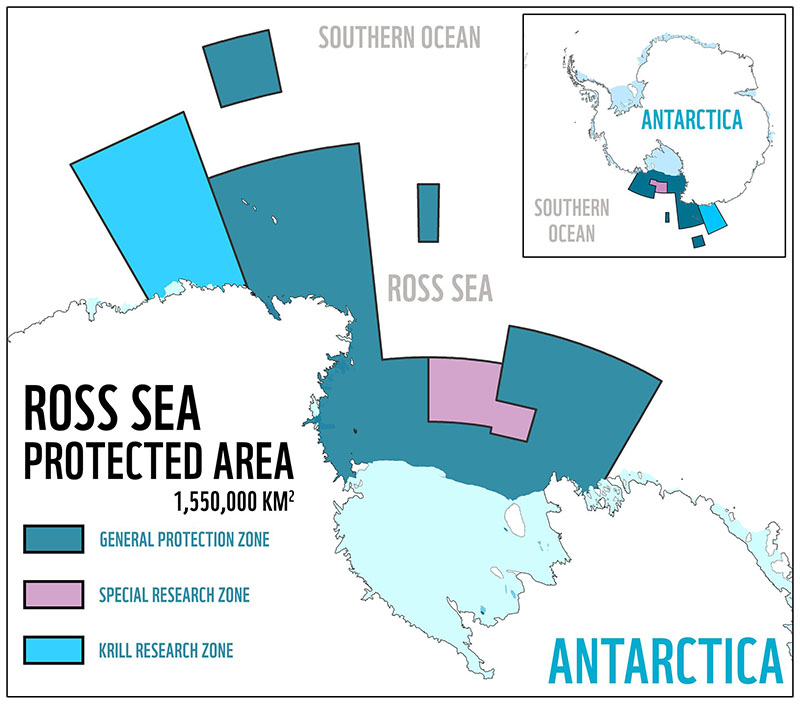 The new MPA, to come into force in December 2017, will limit, or entirely prohibit, certain activities in order to meet specific conservation, habitat protection, ecosystem monitoring and fisheries management objectives. Seventy-two percent of the MPA will be a "no-take" zone, which forbids all fishing, while other sections will permit some harvesting of fish and krill for scientific research.
MPA discussions at CCAMLR have often focused more on fisheries-related issues rather than on conservation and biodiversity values. Years of discussions resulted in the "erosion by negotiation" of the conservation values of MPAs for East Antarctica and the Ross Sea as originally proposed. However, the final Ross Sea region MPA as adopted in October 2016 maintained the boundaries of the previous version of the proposal unchanged. Many critical habitats remain protected.

Although not permanent, the duration of 35 years is longer than the 20 years (or even 10 years) suggested by some nations. Several Members made it clear that limited duration did not set a precedent for other MPAs to follow.Fishing will shift to the north and east away from key predators and to areas with less ice.

Overcoming the five year old impasse has created a momentum for adopting other MPAs in the rest of the CAMLR Convention area. There are already two proposals for discussion, for East Antarctica (proposed by Australia, France and the EU) and the Weddell Sea (proposed by the EU under German leadership). A proposal for the Antarctic Peninsula is being developed.

An increasingly complex global outlook in 2017 may or may not influence this process. However, the Antarctic is still a relatively distant region where global geopolitical tensions are somewhat relaxed with respect to other parts of the world, and where international cooperation is valued. For now we can say confidently that this is the end of the beginning for the Antarctic MPA process. As other MPA proposals are discussed in 2017 and subsequently, we hope the momentum will be maintained so that CCAMLR can complete a network of marine protected areas around Antarctica.