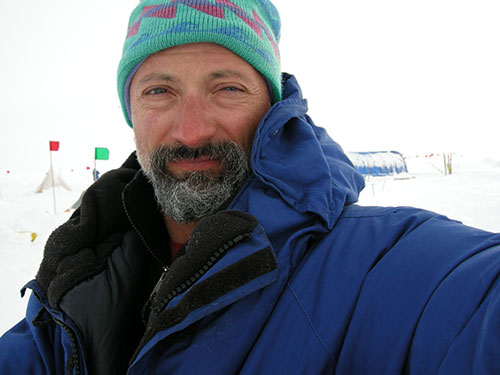 Ricardo Roura is a geomorphologist and social scientist. He has participated in twelve Antarctic expeditions with, among others, the Argentine Antarctic Institute, Greenpeace International, the University of Canterbury (NZ), and the Arctic Centre, University of Groningen (NL), as a scientist, environmental manager, field tutor, or NGO representative. He has also conducted research in Svalbard. He has represented environmental NGOs at Antarctic forums since 1997, and serves as a policy adviser for the Antarctic and Southern Ocean Coalition (ASOC) and the Antarctic Ocean Alliance (AOA). His own research focuses on human behaviour and environmental impact in the polar regions.

I have been passionate about the Antarctic since my childhood. I first went there when I was 19 years old and returned many times since, including for one year. My engagement with Antarctica is a lifetime adventure.
Antarctica is truly international. I have close ties with several countries - by birth, blood or chance - and all are present there, distinct but part of something larger. To me, and many others,Antarctica is like home, yet it is also a wilderness from which we will remain alien.
Antarctica lacks indigenous people but the Anthropocene is evident there too. The short human history in the region is written in its landscapes and ecosystems. Historic sealing and whaling have left their mark. Antarctica is becoming colonised by humans with an ever expanding frontier of stations, camps, transport facilities, tourism destinations, and fishing grounds. Global anthropogenic influence is also apparent in the region’s climate, ice, and oceans. There is a place for humans in Antarctica, but no valid reason to change its fundamental nature.
Managing human influence on the Antarctic requires a measure of sincerity and altruism from all. The international bodies that collectively govern Antarctica should act in accordance with their commitments to protect the region as a natural reserve, devoted to peace and science. They must ensure that natural resources are not overexploited or overused, including by setting aside large areas of land and sea for permanent protection. International engagement and cooperation are necessary to prevent the strategic interests of individual nations to be in conflict with internationally agreed protection goals. The scientific community has a particular responsibility to use knowledge derived from the Antarctic to protect the region and to provide global fora with insights about climate change. Industries active in Antarctica should ensure the environmental sustainability of their operations, which requires restraint. Environmental NGOs, and the public at large, should remind governments of their collective global commitments.
Keeping Antarctica wild is one of the many challenges we and our descendants will face. We should not regard the Antarctic solely as a resource frontier or as a provider of ecosystem services: we need it also as a place of inspiration. As the influence of humankind on the global environment increases and expands we need to know that a wild place still exists somewhere on the planet.