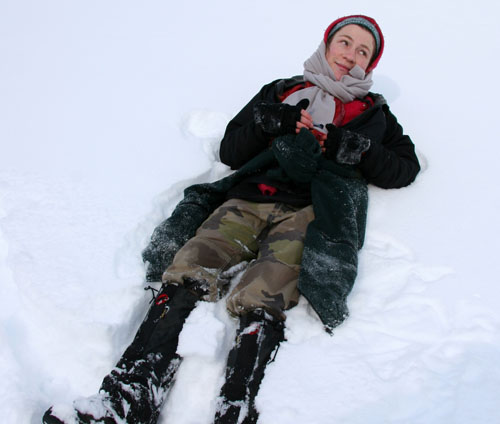 Céline Le Bohec is an ecologist who co-leads the Programme 137 'ECOPHY-ANTAVIA' of the French Polar Institute Paul-Emile Victor (IPEV) since 2002. One of the main current objectives of this Polar research programme is to establish and run the long-term monitoring of undisturbed microtagged penguins from the Sub-Antarctic and Antarctic regions. Through these Life Observatories, her research aims to evaluate the adaptive capacities of animals' populations to future natural, but also human-induced, changes in their environments. Since the beginning of 2012, Dr. Le Bohec has been working for the European Associated Laboratory (LEA 647 ‘BioSensib’), a partnership between the Scientific Center of Monaco (CSM) and the Institut Pluridisciplinaire Hubert Curien (CNRS and University of Strasbourg in France).

Among the sentinel ecosystems of our planet, Polar Regions are blowing the whistle, but humans are deaf and scientists have no voice. Compelling evidence of the anthropogenic role in the dramatic destruction of biodiversity is however not hard to find. Human emissions of greenhouse gases into the atmosphere are heating up the planet and acidifying our oceans at a rate much faster than in natural cycles of the past, at the same time modifying global weather patterns. These human-induced changes in Earth's climate combined with overexploitation, habitat fragmentation and destruction, pollution, and human-induced invasive species, are leading to a huge and rapid ecological upheaval, even within the most remote areas of the world such as the Polar Regions. Scientific data have piled up for decades now, but for whom and to what purpose? Politicians, farmers, scientists or traders, all of us must ask what we are leaving to our children, and to future human generations? Are we so selfish as to enjoy biodiversity, contemplate pristine environments, or breathe pure air, without thinking beyond the ends of our own lives, or at least to the one of our direct children? The question is no longer whether to believe or not in global climate change. It is a scientific fact. The summer Arctic sea-ice extent has declined roughly 40% over the past three decades. In the West Antarctic Peninsula, krill density has declined by ~80% over the same period, concomitant with an increase of 5–6 °C in mean winter air temperatures coupled with a decrease in winter sea-ice cover. Some polar populations are exploding in some areas, and others are nearing extinction. These contrasting results emphasize that human-induced changes operate at different scales of a complex system, and the different, and sometimes opposite, responses from an individual to a species scales are likely to modify the web of interaction at the community or even biome level. The question is also no longer whether to believe that we will be able to stop climate changes, but to find reasonable alternative strategies to offset or rebalance trends and mitigate our impacts. This is our responsibility, collectively but also individually, to steadfastly prioritize global actions to tackle this ongoing planetary imbalance. It is a matter of urgency to stick with it and not postpone these strategies each year. It is also a matter of urgency to get people to understand that preserving the remaining biodiversity we depend on and belong to, is a way to protect our own species. The good news is that we have already done half of the work: we know the nature of the problem and we have developed sets of tools to address it. The big challenge now is implementation and enforcement. In this context, Antarctica and its surrounding seas are a very good showcase. For the last half century, the Antarctic Treaty has promoted and facilitated communication and actions through a synergistic cooperative effort of international and interdisciplinary partnerships to increase knowledge to better understand, better protect, and better respect these unique and key ecosystems. Of course it is not always easy to find a common accord between nations in this Treaty, but let us try to use it as an example for the earth.