Climate change predictions for the coming decades may change the prognosis for some seal species significantly. In a warmer Arctic, endemic seals will face extreme levels of habitat change, the most dramatic being the reduction in sea ice extension as well as a sooner melting in spring.

Impacts of sea ice loss depend on the use of the different kinds of icy habitats by the seal's species for their reproduction, molting and hauling-out behaviors and by where they catch their preys. As detailed knowledge about the way each species is linked to sea ice is lacking, there is a significant difference of opinion regarding seal species that is most vulnerable to climate change. Most likely all ice-associated species will face great challenges.

Of the Arctic seals, the hooded seal is generally considered as the most sensitive as it has very specific feeding requirements and use sea ice for whelping and molting. There was a moderate increase in hooded seal pup production and population size in the North West Atlantic between the mid-1980s and 2005. In contrast, the North East Atlantic population of hooded seals has declined by 85-90 % over the last 40-60 years . The cause of the decline is unknown, but it is likely related to changing ice conditions and perhaps also overharvesting. As hunting has recently been prohibited, it has been suggested that the population may now be reaching a stable lower level .

Considering sea ice conditions requirements for denning and whelping, ringed seal appear to be more at risk than any other seals with a direct impact on pup survival which is strictly linked to shore-fast ice and snow cover conditions. Declines in reproduction and survival of ringed seals have been linked to variations in their sea ice habitat including responses to early or late ice break-up in spring, and relatively heavy or light ice conditions . Years with low snow cover and unusually warm weather or rain events in the spring have also resulted in reduced survival, probably due to destruction of lairs or land-fast ice dislocation.

A population model was used to examine changes in the size of the NW Atlantic harp seal population between 1952 and 2010 and resulted in an estimated exponential population growth to a total population in 2008 of 8.0 million animals . There are concerns that both female fecundity and neonatal survival have been reduced in recent decades in the Canadian harp seal subpopulations both in the Gulf and on the Front due to declines in sea ice stability and thickness .

Harp seal pup production estimates in the White Sea stock have experienced significant declines since 2004, dropping from over 300,000 pups to approximately 150,000 pups. The reasons for the declines are not known, but changes in sea ice cover, industrial activity and hunting have been suggested . Recent model runs by ICES (2008) have confirmed that the population of harp seals in Eastern Greenland may have increased in size from its earlier depleted state since ca. 1970, and it has been predicted that the population could continue to increase under the current harvest regime, which involves very small annual removals.

A recent study revealed negative correlations between both ice cover and the NAO (North-Atlantic Oscillation) index and harp seal mortality in the Gulf of St. Lawrence, indicating that lighter ice cover and lower NAO values result in higher mortality. They also assessed the long-term negative trends in sea ice cover in the breeding regions of harp seals across the entire North Atlantic during 1979 through 2011 and found that sea ice cover in all harp seal breeding regions has been declining by as much as 6% per decade.

The same is probably true for the bearded, spotted and ribbon seals despite a lack of data for estimating trends of their populations.

Recent observations of Pacific walrus population responses to summer ice condition in Chukchi and Bering seas suggest that rates of calf-mortality and poor body condition of adults are inversely related to the persistence of sea-ice over offshore feeding areas and the length of time that animals occupy coastal haul outs . Because of their highly specialized alimentation on shelled seafood (mussels) living exclusively on continental selves, walrus is particularly sensitive to any change in benthic shellfish distribution and population densities. A visual comparison of areas of high benthic production and areas that have supported large terrestrial haul outs of walruses indicates that walruses have historically selected sites near areas of very high benthic productivity. Benthic productivity along part of the western shore of Alaska is low because of the nutrient-poor waters of the Alaska Coastal Current. Consequently, the number of sites with adequate food resources to support large aggregations of walruses is likely limited.

As most of Arctic seals avoid multi-year sea ice, too thick and far from productive continental shelves, this icy habitat has the less impact on seals survival. The paradox is that it is given as the very last habitat to resist to summer sea ice melts in some models at the end of the 21st century, reduced to a thin surface located along the northern coasts of Canadian Arctic Archipelago and Greenland, a reluctant habitat not suitable for seals.

Less ice, together with increased water and air temperatures, will impact seals’ mobility and the density and distribution of their prey.

Indirect impact due to increased discharge of freshwater (rivers) into the Arctic Ocean may alter currents and participate to accelerating shore-fast ice and pack ice above continental shelves dislocation and melting in spring, two of the most important icy habitats of Arctic seals. But it also affects primary production and is expected by some specialists to increase spring and summer phytoplankton blooms, and therefore invertebrate and fish productions. For others, this phytoplankton increase may not balance the sea ice algal production loss, which flourish at the bottom face of huge areas of coastal and continental shelves pack ice during spring, and expect no primary production increasing if not a reduction of it.

Moreover, uncertainties about the coastal and continental shelves waters primary productivity trends in response to the advanced onset of melt season and their consequences on the all Arctic Ocean marine ecosystem productivity, which could decline drastically after a short-time increasing responding to the increasing rivers flux alimenting the open water primary production (phytoplankton) with more alluviums, is another limiting factor affecting the prey availability for seals.

Additionally, the impact of ocean acidification due to larger CO2 capture may impact directly preferred walrus and bearded seal preys population production as calcification process of shell production by bivalves could be negatively impacted . The same is true for all Arctic seal species whose preys, mainly fishes, depend on calcified zooplankton and or shellfishes for their proper alimentation. 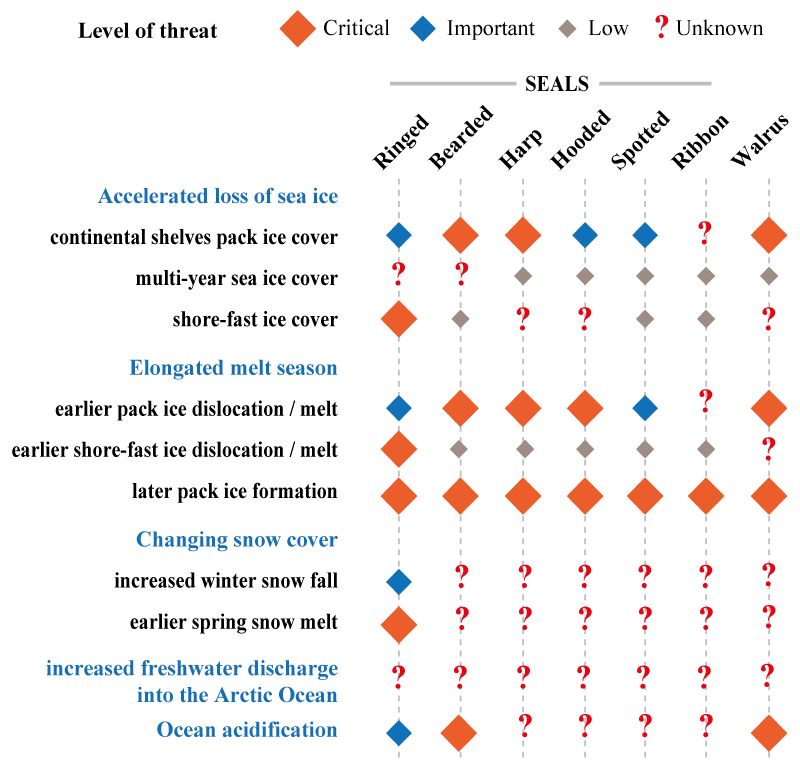 Expected Climate Change impact on the Arctic seals and walrus

Regarding natural evolutionary adaptation abilities of mammalian species, 5 to 70 years is very short, a lap of time covering less than one generation in the worse hypothesis to 3 generations in the better case, a lap of time drastically too short for any kind of genetic adaptation process.

With seals species which behaviors are much more less plastic than primates or cetaceans ones, most scientist think very unlikely they can develop efficient behavioral adaptations to sea ice retreat and elongation of melting season, specially in changing their whelping grounds as melting sets sooner and sooner. The possibility that Arctic seals can change their whelping sites by shifting them northward as the spring sea ice conditions of their current sites is degraded seems to be poor. Most sea ice seals systematically return to their birth site to reproduce despite the poor sea ice cover9.

The future of subarctic species, the harbor and grey, seals seem to be quite different.

For the harbor seal, during spring low ice years in Greenland and Alaska, pup production and adult local abundance are lower than in normal years . Some authors suggest a northward expansion of harbor and grey seals populations during the summer, when and where sea ice retreat provide wider open ice free waters (Guy Fortier, Arctic.net, pers. comm.) with an impact on Arctic species through competition for resources and, on a long term perspective, a possible replacement of Arctic seals species populations if they finally disappear. At the same time, open water predators, killer whales in particular, are awaited to exploit a large part of the increasing sea ice free Arctic waters with the sea ice retreat. In the Canadian high Arctic, killer whales have been reported to be expanding their range northward during the ice-free period . Thus, killer whales could become a new predator for the northern most Arctic seals species, such as harp, ringed, bearded and hooded seals.

Less ice, together with increased water and air temperatures, will increase the risk of disease, and possibly increase the risks from contaminants. Seals will also be affected by an increase in human activities like shipping and exploitation of natural resources in areas previously inaccessible due to ice.

To summarize, we will say that the most significant impact of climate change on Arctic seals is expected to be the loss of ice habitat, crucial habitat for reproduction and alimentation of most seals species, although other less direct impacts have also been predicted: food availability reduction, increase of disease and increase of human presence with its activity induced disturbance and pollution.

Seasonal pack ice, specially when it extend over continental shelves, the most productive regions of Arctic seas, is used by most Arctic seals, being of critical importance for their feeding, most of their preys living in close relation with ice covered continental shelves.

Harp and ringed seals, the main target of Inuit hunters (respectively 40 and 47% of total Aboriginal catch, see Annex 2), are critically linked to seasonal pack ice for all aspects of their life, the second depending nearly exclusively on shore-fast ice for its reproduction.

As Climate Change impacts principally shore-fast ice and dense seasonal pack ice, harp and ringed seals are expected to be highly threatened by the earlier melting season onset. Those changes would greatly reduce reproductive success, sooner dislocation and melting of ice reducing pup survival, as well as adult will be faced to expanded energetic costs for their molting (thermoregulation cost much higher in water than above ice in air) and for feeding as sea ice will be located farer of their feeding grounds above continental and coastal waters. Seal pup survival in ringed seal will also be reduced by the changing regime of snow fall, the reduction of snow on shore fast ice reducing the availability of whelping dens for the mothers or inducing higher mortality rates in pups due to insufficient protection against the atmospheric cold and predation by polar bears and Inuit hunters.

Considering the lack of reliable knowledge about the future reaction of Arctic seals population to Climate Change, specially for harp and ringed seals, the precaution principle should be applied to seals harvest, both commercial and subsistence, and quotas (see V.2. section for quotas calculation) should be strictly linked to reliable report of all catches, including lost animals, a principle also applied to Inuit hunters, to maintain an efficient sustainable management of seals as long as it will be possible in the changing Arctic Ocean.